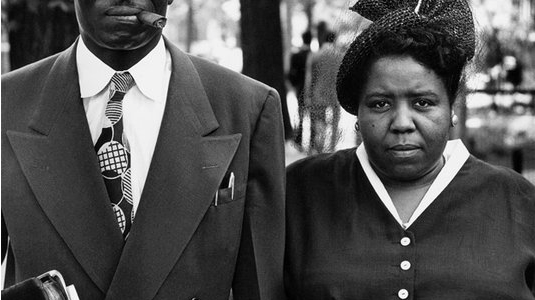 Gordon Parks returned to his hometown in southeastern Kansas in the spring of 1950 to make the series of photographs that would accompany an article for Life magazine meant to center on the issue of segregated schools and their impact on black children in the years prior to the Brown v. Board of Education of Topeka decision (1952–54). Fort Scott was the town that Parks had left more than twenty years earlier, and he used this assignment to revisit early memories of his birthplace, many involving serious racial discrimination, and to reconnect with eleven members of his junior high school graduation class and discover what had become of them since his departure. When Parks arrived in 1950, only one member of the class remained in Fort Scott, while the rest had followed the well-worn paths of the Great Migration in search of better lives in urban centers such as St. Louis, Kansas City, Columbus and Chicago. Traveling to these cities, Parks found his friends and their families and photographed them on their porches, in their parlors and dining rooms, on their way to church or at work, sitting down to interview them about their decision to leave the segregated system of their youth and head north. His resulting photo-essay and planned cover were finally slated to appear in Life in the spring of 1951, but were replaced by Truman’s firing of General MacArthur and were never published.
Co-published with the Museum of Fine Arts, Boston, and The Gordon Parks
Foundation
Exhibition: Museum of Fine Arts, Boston, 17 January to 13 September 2015